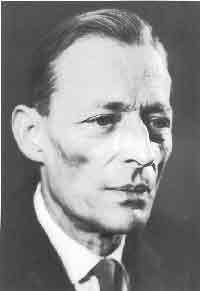 Hans "Jean" Gebser was born in the then German (Prussian) town of Posen, now Poznan, again a part of Poland.

Gebser's father was a lawyer of some renown; his mother a whimsical, self-seeking beauty many years younger than her husband. He grew up in an educated and cultured environment. Difficulties between his parents drove him inward and he instinctively turned toward literature as his medium of discovery. He started studying in Berlin, but was forced to interrupt his studies upon his father's death (1922). He started working in a bank, but continued his literary activities. The appearance of the first Brown Shirts in Munich made him leave Germany.

The first stop on his journey was Florence, where he worked for a while in a second-hand bookstore. It was here that he came to the realization that all the books he read had never taught him how to live, hence he began a more active quest toward fulfillment. He tried Germany again, but bade it a final farewell in the Spring of 1931, first going to Paris and then on to Southern France. It was here that he changed his German first name "Hans" to the French "Jean." Following the footsteps of Rilke, Gebser moved to Spain. He managed to learn the language and obtain a position in the Ministry of Education. He made friends with many prominent Spaniards, among them Federico Garcia Lorca. Gebser also published a volume of translations of some newer Spanish poets. It was in Spain that Gebser first conceived of the ideas that would later take form in his works, Decline and Participation and, of course, The Ever-Present Origin. Shortly before his home in Madrid was bombed in 1936, he managed to flee from Spain. He settled in Paris and made the acquaintances of many of the notable French artists and intelligentsia of the day, including Pablo Picasso. He was intensively involved in writing and literature, translating Hölderlin's poetry into Spanish and some of his Spanish friends' political essays into German; he also produced some of his more minor works.

Two hours before the Germans sealed off the borders of France, Gebser again managed to flee, this time to Switzerland, where he would stay from then on. These years were the most productive for Gebser, although life still was not easy for him. He supported himself by freelance writing, but it was in Zürich that he befriended Carl Gustav Jung, at whose institute he also taught for many years. In 1949/1950, his efforts culminated into the publishing of The Ever-Present Origin, his most profound statement regarding the unfoldment of consciousness in man. Throughout all of Gebser's writings we find him wrestling with this subject, trying to find real answers to the important questions of life, such as "Who am I?," "Where do I come from?" and "Where am I going?". During the remainder of his life, Gebser taught, traveled, wrote and lectured. He enjoyed a certain, yet modest, renown for his work. He died in1973.

Gebser tried to understand the unfoldment of human consciousness.  He developed a model examining the structures of consciousness: the Archaic, Magical, Mythical, Mental, and Integral structures. The Archaic structure can best be described as a zero-dimensional, non-perspectival world which could be compared to a state of deep sleep. It was characterized by non-differentiation and the total absence of any sense of separation from the environment. This was a world of identity between self and surroundings; not a world in which we could speak of consciousness in any terms that would be meaningful to our modern understanding of the term. By contrast, the Magical structure was characterized by a certain separateness, but not a total separation by any means. Dimensionally this could be described as one-dimensional; a pre-perspectival state of timelessness and spacelessness. It's like a state of sleep. Magic man was much a part of his environment, to be sure, and felt secure only within his group, his tribe or clan. It was the transition from the Archaic to Magic structure of consciousness that has probably been mythologically captured in the story of the "Fall of Man." The clothing of knowledge in myth is what characterized the transition to the Mythical structure of consciousness, the two-dimensional, unperspectival state of consciousness that can best be compared to a dream. Imagination and attunement with natural rhythms became important factors in man's life. The separation begun in the Magic structure reaches a tensional climax in the Mythical. This structure is superseded by the Mental structure, whose appearance coincides with the rise of Greek civilization. In this regard, it can be seen that modern thought disregards a good deal of mankind's history, for it is to the Greeks that we most often trace our intellectual roots. By comparison, the Mental structure of consciousness is a three-dimensional, perspectival world that we describe with the term wakefulness. The polar tensions of mythology are replaced by the analytical separation of duality and opposition. Thinking is primary, and in its latter phase rational thinking is primary. But this structure, too, is yielding to a final mutation which Gebser identifies as the Integral structure of consciousness. This is described as a four-dimensional, aperspectival world of transparency. This is a time-free, space-free, subject- and object-free world of verition.

From a methodological point of view, three fundamental notions are involved: systasis, synairesis, and eteology. The first term, systasis, goes beyond mere synthesis, which is a mental-rational concept, to achieve a total integration of all parts simultaneously. Synairesis is the means of achieving the end just described. It emphasizes the how of such total grasping, namely by the mind or spirit. It is synairesis that enables us to achieve the transparency that is indicative of the Integral structure of consciousness. Finally, eteology replaces philosophy as the way of knowing and acquiring knowledge. Eteology becomes the statement of truth in lieu of the philosophical statement about truth. This approach goes beyond the limitations of space- and time-perception, to a complete and liberating understanding of the whole. It should be noted that this transition is still in process; it is not yet a completed act.